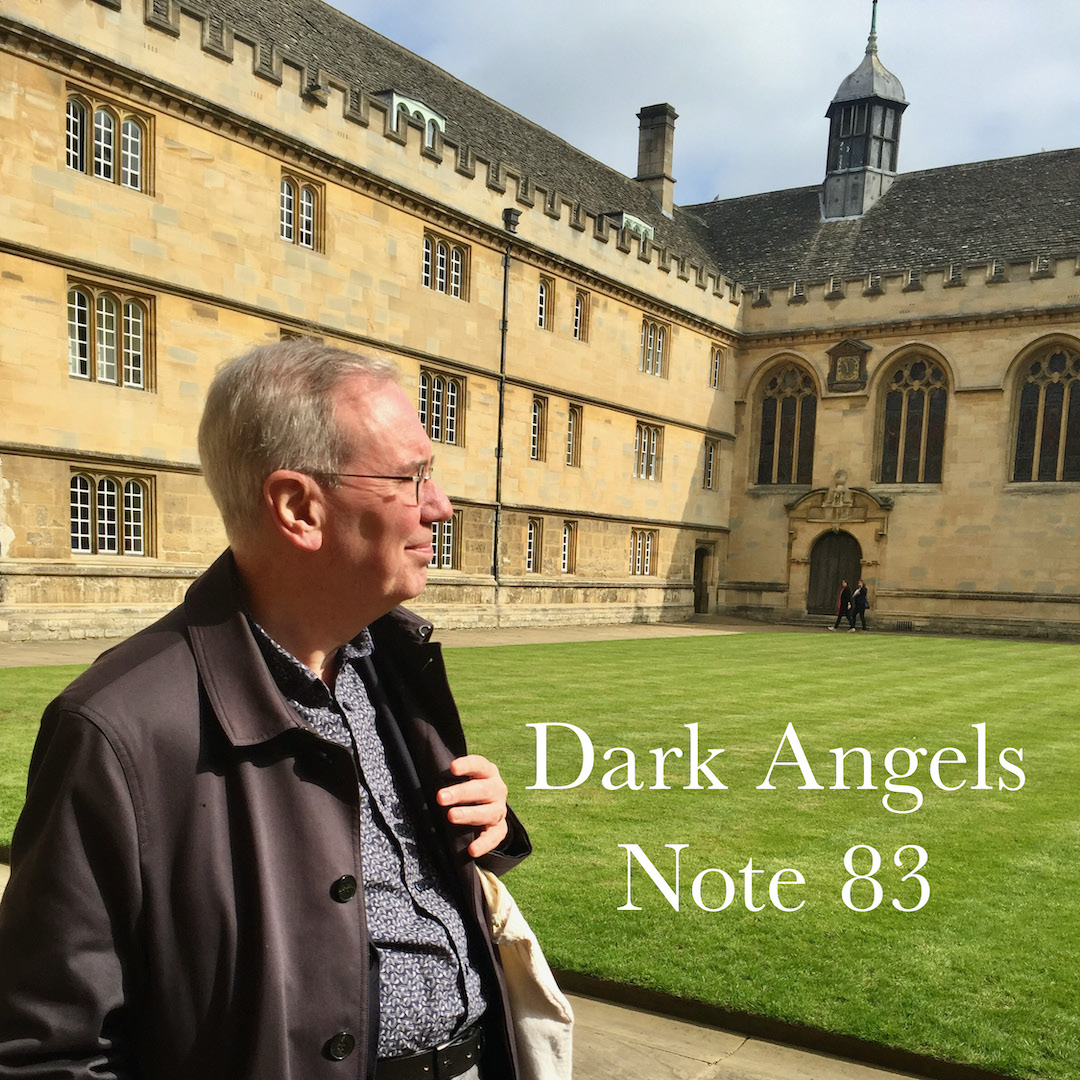 Look who is in the hot seat this week. With happy news to share, it’s our very own John Simmons.

I’m mainly focused on the 21st anniversary edition of my first book We, me, them and it. This was an important book for me, as it was my first, and it seems to have touched many people. Unusually for a business book, it’s very personal as I was encouraging people (and myself) to bring their emotions to business writing and their personalities to work.

Given the responses of people to the news of the republication, the book influenced a lot of writers, transforming their approaches to writing at work. Many of them have been saying very kind words on Twitter, Instagram, LinkedIn etc. So now I’m in the slightly surprising position of doing more social media, articles, podcasts, zoom events, short films than I ever imagined would be asked of me 21 years later. From my personal point of view the book led directly to the founding of Dark Angels and 26 – not a bad result.

Those who know me won’t be surprised if I recommend John Le Carré, a writer never given his full literary due as he gets pigeonholed into a genre of ‘spy fiction’. For me he’s a great writer who’s much bigger than his genre. I’ve just finished his last book Silverview – not one of his greatest but pretty good for a writer approaching 90. I found it moving, simply knowing these were his last words.

But if you haven’t read his Smiley books – and seen the 1980s TV adaptations – you’re in for a treat. Although his early novel The Spy Who Came In From The Cold is another good starting point. I’m now catching up on the Le Carré books I haven’t yet read, with A Perfect Spy and The Russia House top of the pile.

Why do I like him so much? Isn’t the spy genre out of date? I think my admiration is not primarily to do with plots or characters (although he creates some wonderful ones) but with language. A SAGE doctor recently said ‘loose language costs lives’ and Le Carré abides by similar principles. He’s not a showy writer, his style is not poetic, but it seems to me there is a constant tension between striving for precision and playing with ambiguity (and that you can never achieve one because of the other). Le Carré, like one of his spies, crosses and recrosses the borders between the two. I relate to that, wishing to be precise with words but also enjoying their inherent ambiguity.

In the mid-90s I went to a workshop in London by the poet David Whyte. He’d just published a book called The Heart Aroused about taking poetry into American corporations like Boeing. He talked about ‘inviting your soul to work’. This was unusual and inspiring at the time (it still is) and I embraced the possibility of using poetry in corporate writing.

He also had a mesmerising way of reciting his poetry, reading and repeating each line. ‘Invite your soul to work’ made sense to me, an exciting invitation to put more into and get more out of working life. It was one of the things that led to my books and to Dark Angels.

I rarely get stuck because I know, from experience, that you just have to be patient. Thoughts are brewing and they will emerge as the right words when they reach their time. Your brain is constantly taking thoughts in, playing with them, reworking them, until you are ready to write – sometimes taking you by surprise.

Of course, along the way you can do things that are part of the process, such as running or walking in the woods or automatic writing. But try not to think of it as ‘being stuck’, it’s simply part of the creative process.

I’ve returned to F Scott Fitzgerald’s The Great Gatsby at different ages but each time it leaves me moved. It has a reflective, slightly melancholy tone but I like that. It’s a natural tone for the story that has been told by a narrator who has been an observer of the events and characters in the novel. I was influenced by this when writing my novel Leaves.

There is a last page in Gatsby where the narrator stands looking out over water, with the house on the other side and the sense of much more beyond that. It draws you in to reflect on what you have shared together in this story, with all its ups and downs, changes of scene, variety of characters, but finally focusing on this moment of solitude in which the narrator finally becomes the centre of attention. A desert island moment.

I once saw it as a performed reading on stage by Chicago’s Steppenwolf Theatre Company. It took over seven hours but was completely engrossing. By the end it felt that the whole audience was absorbed into the same scene – ‘so we beat on, boats against the current, borne back ceaselessly into the past’. I was in tears. I’m sure I would be on a desert island too – but reminded that we are not solitary, that we are all connected. And therefore consoled.

Thank you, John. And a huge congratulations on the republication of the book that started it all. So many of us continue to feel validated and inspired by what we can bring to our work having read it – souls and all.

Spring Foundation Course
We’re excited to be running the four-week online version of our acclaimed Foundation Course again. The course introduces and explores our core principles – great for first-timers and returners alike (see the website for more). It’s limited to eight places and will be led by Neil Baker and Jamie Jauncey, with spot visits by guest tutors from the Dark Angels family.

John is leading an online masterclass with Arvon that workshops many of the principles behind We, me, them and it. Bring pencils, laptops and brains for a lively and enlightening session. Sign up here.

If you don’t make the Arvon workshop (or even if you do), join us for an online conversation with John Simmons and Jamie Jauncey. Exclusive to Dark Angels, this will be a convivial gambol around the challenges, questions and stories that lie behind John’s book. More details to follow.

Weekly Tuesday Gatherings
Join us on a Tuesday evening for the Dark Angels gathering. This is a lovely hour of reading, writing and communing. Everyone is welcome; in fact invite a friend along. We meet at 7pm UK time. To join us, click here on the night. There’s no need to register in advance and we’ll be using the same link every week from now on.

One Last Thing 👏
Many of you who joined us at the Winter Solstice gathering last month will recall a suggested voluntary donation to Kent Refugee Action Network. This week, Neil received a grateful note of thanks to say that all £510 you raised will be allocated to providing trips, activities and treats for young people. Fantastic!