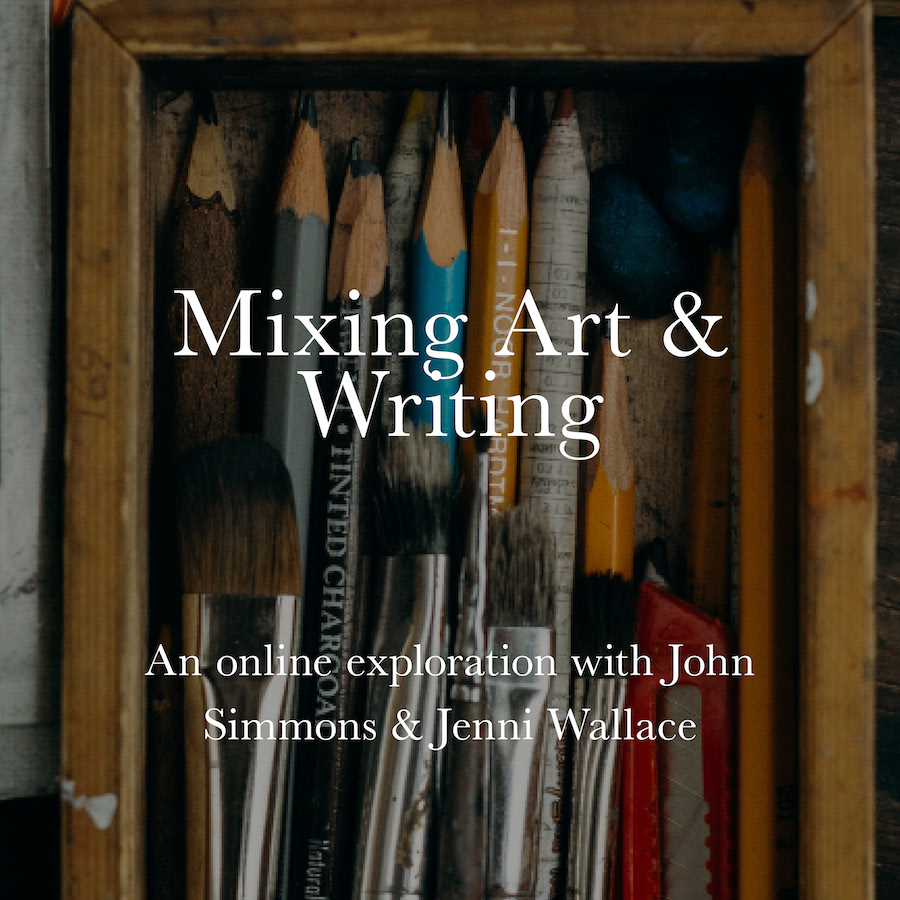 We’re going to run an online Dark Angels course that explores connections between visual and verbal art. It’s a big field, and the connections are many, not least because each individual will make unique connections.

It’s always been a subject of interest to me. I remember at school doing a weekly course – not part of the normal curriculum – that simply involved looking at art and learning more about it. It inspired visits to the Tate Gallery and to other galleries, and one of the things I’ve missed most during pandemic lockdowns has been regular visits to museums and galleries.

Strangely, perhaps, I’ve never been motivated enough to plunge deeply into making art, but I have had moments. Every so often I’ve had the urge to sign up for drawing or painting classes, and I try not to be discouraged by a patent lack of ability. Really it doesn’t matter: it’s enough to enjoy the feeling of playing with making marks, taking pleasure in the mixing of colours, building up layers on a surface. And to appreciate the work of artists who use so many different techniques to express their creative visions of the world.

A couple of years ago, when I began writing a novel called Painting Paris, whose main characters were artists in Montmartre in the early years of the 20th century, I decided to do more serious ‘research’. There was a Dark Angels course in Vence, the former house of Henri Matisse; a life drawing class at the British Museum; an oil painting evening class in Hoxton; and an extended visit to Paris to explore Montmartre and the artists associated with it. It was the most enjoyable ‘research’ I’ve ever done for a novel.

So last year I had planned a Dark Angels course with the artist Jenni Wallace at Tilton House in Sussex, a gathering place for the writers and artists of the Bloomsbury set in the first half of the last century. It was a terrible disappointment when the pandemic meant we had to postpone the course. But to bridge the enforced six-month gap Jenni and I decided that we would offer an online series of briefs that combined art and writing. The responses became the Doolally Gallery, a virtual art gallery of work created by the participants. Everyone seemed to love it. The course provided a sanctuary at a difficult time when we were all struggling to deal with the threat of the virus and the effects of dealing with it – isolation, limits on movement and social interaction, the loss of the stimulus provided by other people.

Unfortunately we’ve still not escaped those conditions, so we’ve decided to run the course again in a 2021 version for a group of ten people maximum. We have the advantage now of knowing what works best. What works is providing the stimulus and the encouragement for individuals to explore and discover for themselves and about themselves. It’s not a ‘how to draw’ class.

Above all it’s about the joy of finding different ways to express creativity: writing of many different kinds, as well as experimenting with whatever visual techniques appeal – painting, drawing, printing, sewing, collage, whatever takes your fancy, you can give it a try.

And if you’re a writer, you’re almost bound to discover some insights into the writing process that you’ll not only enjoy but find useful. As the artist Bridget Riley wrote: “The working process is one of discovery and it is worth remembering that the word ‘discovery’ implies an uncovering of that which is hidden.”