Last week I had the unusual (for this year) experience of running a Dark Angels course – a live, residential one with real people. Following Covid-19 rules, sanitised, socially distanced, masked when necessary. It was, as Dark Angels gatherings are, joyful, therapeutic, uplifting.

The course was at Tilton House in Sussex, once the country home of John Maynard Keynes and his wife, the Russian ballerina Lydia Popokova. Nearby was Charleston, where Vanessa Bell, sister of Virginia Woolf, had lived. The Bloomsbury Set would gather in these places, and all around we saw visual reminders of this literary and artistic heritage.

Originally the course was scheduled for April, and it was planned as a Dark Angels experiment, to explore the connections between visual and verbal art. But the pandemic intervened. We had to shift from April to October, spring to autumn. To make best use of the enforced gap, my co-tutor (artist Jenni Wallace) and I supplied fortnightly briefs that ten of us responded to. The responses became the Doolally Gallery, a virtual gallery that took on a surprising reality by the time we had completed the eleventh exercise in early October. The gallery contained visual work as well as written; it had become a unique online distance learning course.

By late October, Covid’s second wave was rising and some of our participants needed to drop out and shield for the sake of others. But five of us gathered at Tilton, and I’m so pleased we did. It was Dark Angels but not as we know it – yet it was Dark Angels exactly as we know it. We went through the days sharing our work, playing with words and colours, writing still lifes, painting with both hands to music, enjoying the beautiful location in the sheltered lee of the South Downs.

Jenni and I not only set the exercises but joined in, as we had with the Doolally briefs. We all learnt to share work openly and positively, enjoying what we were all producing as a collective activity. As the quiet, almost spiritual conclusion, we assembled in the yurt in the garden, standing in a circle to read the pieces we had each written about specific times of the Tilton day – from first daylight through the day to the evening and night-time. Mark recorded us reading and it now exists as a written and audio record of this atmospheric time.

Listen to the audio of the Tilton day – from first daylight through to the evening and night-time. 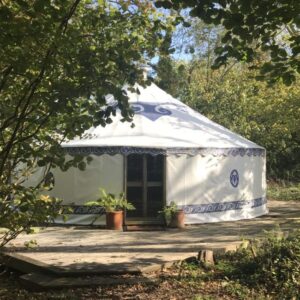