Good news from the front lines

Front lines are all on our minds right now. I think of poetry as language’s front line, the place where things can at once be at their most considered and their most intense, raw, immediate. I’m reading and listening to a lot more poetry than normal. It seems to be everywhere, on social media, on the radio, in emails from friends. We crave poems like secular prayers, a source of comfort in these days of crisis.

Not all poems are written to soothe. Some are intended to unsettle. Thus, Reading the Safeguarding and Child Protection Policy by Susannah Hart. This was the poem (an unpromising title, thought one of the judges) chosen from nearly 17,000 entries as the winner of the Poetry Society’s 2020 National Poetry Competition. Previous winners include Tony Harrison, Carol Ann Duffy, Jo Shapcott and Ruth Padel.

This is the big league, make no mistake. And it’s a big, powerful poem on a subject close to the heart of any parent, more particularly any school governor, both of which Susannah happens to be. In one long, fluent and shocking sentence she contrasts the impersonal, emotionless, bureaucratic language suggested by the title with the all-too-human horror of the activities to which the policy alerts its readers.

Susannah, I’m inordinately proud to report, is a Dark Angel. For me, my Dark Angels co-founders, John Simmons and Stuart Delves, and probably a number of other early Dark Angels participants, including Susannah’s husband, Andy Milligan, now one of our Associates, this has something of the I-told-you-so moment about it. We blow proudly on our fingernails and buff them on our lapels, not because we claim any credit, but simply because we have all known for a long time of this talent that sooner or later had to be noticed and celebrated.

Susannah came on the second ever Dark Angels course, and the first one I was involved in. We held it at Moniack Mhor, the Scottish Writer’s Centre, high on a hillside near Loch Ness. She will not mind me saying that back then she was diffident when it came to her personal writing.

This was essentially a business writing course and Susannah was at that time a professional writer with a big branding agency. None of us had yet grasped what was really happening on these courses. Unwittingly, alongside the workplace writing, we were encouraging people to reach within and find those thoughts and feelings that can sometimes best, or perhaps only, be expressed through the medium of poetry. 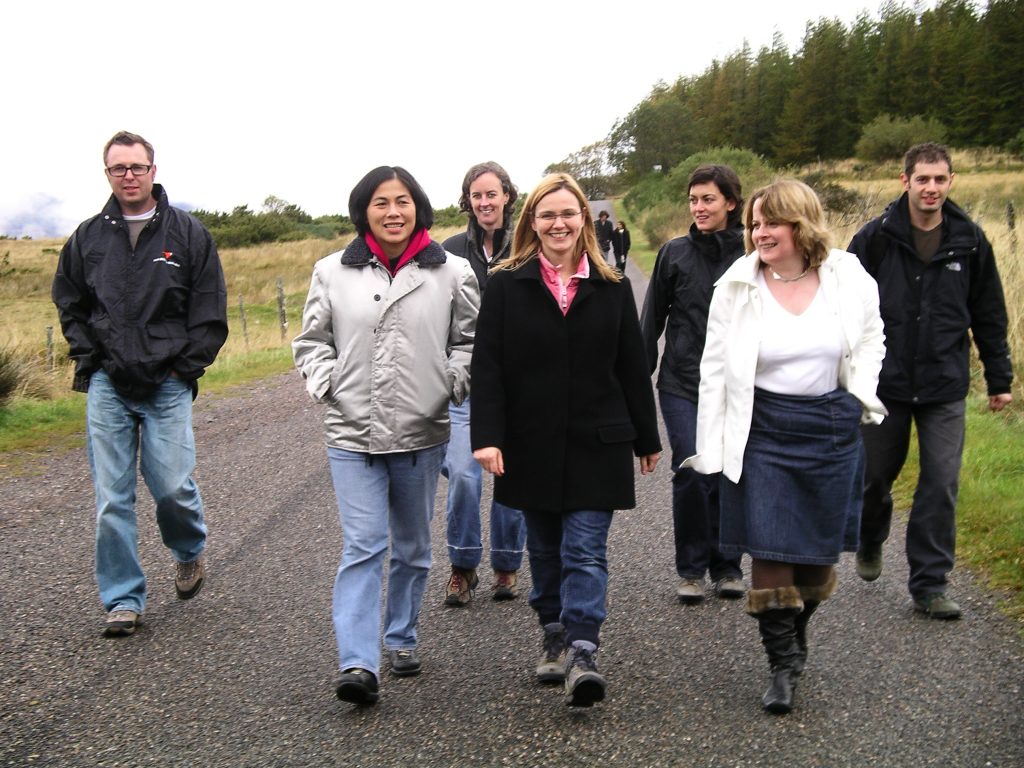 Susannah and the class of 2005 at Moniack Mor in Scotland.

I remember Susannah reading a short, simple poem which I think, oddly enough, had a theme of protection. From what I recall it involved a child and a car seat. I clearly remember that it stunned me. I thought, this person has a true poetic gift. Susannah demurred. But she came with us to Spain the following summer, on our first ever residential, and served up another astonishing piece of work.

The Saints’ Report to God on Aracena offered a clever twist on the idea of an annual report, as the local saints filled the Almighty in on the goings-on throughout the year of the townsfolk in the small neighbouring town. Here it’s important to reiterate that we claim no credit for either these early poems or Susannah’s subsequent success. None of us are poetry critics or tutors. We don’t run poetry classes. All we do is offer time and encouragement. The work comes from its maker.

Since then Susannah’s career as a poet has blossomed, with many published poems, awards, her own collection, Out of True, published last year by Live Canon, and a seat on the board of Magma, the poetry magazine. She has also faithfully continued to delight us on Dark Angels courses and retreats, and with her contribution to our 2014 collective novel, Keeping Mum.

For want of a simple alternative, we sometimes refer to our community of former participants as alumni. There’s a certain formality about it, which inevitably conjures images of gowns and mortar boards. In fact, the word alumnus, or in Susannah’s case alumna, shares its Latin root with the word that means nourishing, as in Alma Mater. It would be lovely to think that we have nourished Susannah. She has certainly nourished us.

It seems appropriate to give the last word here to the poet laureate, Simon Armitage, himself an honorary Dark Angel. Simon was guest reader at several of our early courses when we held them at Lumb Bank, Ted Hughes’s former home in West Yorkshire. We’ve stayed in touch and over the years I’ve frequently chaired his events at the Edinburgh International Book Festival.

Speaking to the Guardian just 10 days ago he said: ‘Poetry is by definition consoling … it often asks us just to focus and think and be contemplative. It’s unlikely that there’s going to be a book of poems that are consolation against catastrophe, but just in poetry’s nature, in the way it asks us to be considerate of language, it also asks us to be considerate of each other and the world. In the relationship with thoughtful language, something more thoughtful occurs.’ Susannah would surely concur.

Listen to Susannah read her wining poem on the Poetry Society’s website.